Enter your registration and mileage to get a free valuation. Release the value of your vehicle.

New Renault MEGANE R.S. TROPHY-R is the most powerful production car ever produced by Renault. It is the ultimate expression of all the expertise of Renault Sport.

Renault has revealed the track-focused Megane R.S. TROPHY-R by becoming the fastest front-wheel-drive car to lap the Nurburgring with a time of 7m 40.1s. The hot hatch beat the previous record, set by the Honda Civic Type R, by almost four seconds. 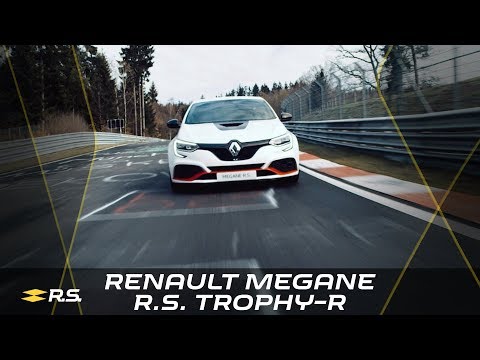 Radical Enough For You?

True to its roots, Renault MEGANE R.S. TROPHY-R – driven by Laurent Hurgon – beat its own time on the Nürburgring North loop, setting a new record in the Front-Wheel Drive category of 07’40’’10.

Fans of extreme power and agility the R.S. Performance accessories, which are available only for the new Renault Megane R.S. TROPHY-R.

The Fastest Hot-Hatch By Renault...EVER!

Admire The Attention Given To The Details

Take your seat in the highly race tuned cockpit. Be won over by its refined racing materials and high-quality finish.

Customise your Renault R.S TROPHY-R with our range of accessories.

This six-point harness, developed with Sabelt, ensures optimal safety on the track, in addition to an inimitable racing style.

millimeters giving the Megane R.S. Trophy-R a lower center of gravity and better support on the ground.

The Renault Sport torque wrench is an exclusive tool for all tightening operations. Tested and approved by the Renault workshops, its release and resetting technology ensures precise tightening torque.

The Flag Shape air intake is an opening on the front grill replacing the R.S. Vision front foglights,

allowing an additional airflow to the engine, in combination with the Boa air duct.​

Take Advantage Of Our Exclusive Stock

Renault Trophy R starting from £51,140.00 and with only 30 coming into the UK - We've only got 1 available at Martins Group to pre-order!

No Better Time Than Right Now!

Terms and Conditions: Finance provided by Renault Finance, PO Box 495, Watford, WD17 1BR. Subject to status. Guarantees and indemnities may be required. You must be a UK resident (excluding the Channel Islands) and over 18. Offer based on 6000 miles pa, excess mileage 8p per mile inc VAT. Terms and conditions apply. Offers cannot be used with other schemes or finance offers. Prices and offers shown are available on specified new vehicles when ordered by 9 July 2018 and registered by 31 August 2018. Participating dealers only.Offer shown is available to new Renault Finance customers when taking Renault Finance.

Back to Top
Back
Book A Service
Vehicle Valuation
Compare Saved Vehicles
Top
Close
Your Cookie Settings
Select your cookie settings
Strictly Necessary Strictly Necessary cookies are essential to let you move around the website and use its features, such as accessing secure areas, shopping baskets and online billing. These cookies allow our website to provide services at your request.
Functional Functionality cookies are used to remember the choices you make, e.g. your user name, log in details and language preferences. They also remember any customisations you make to the website to give you enhanced, more personal features.
Targeting Targeting cookies collect information about your browsing habits to deliver adverts which are more relevant to you and your interests. They also measure the effectiveness of advertising campaigns.
Save Settings
Cancel Changes

Your settings will take affect when you refresh the page or move to a new page. Find out more about cookies

This site uses cookies and related technologies for site operation, analytics and third party advertising purposes as described in our Privacy and Data Processing Policy. You may choose to consent to our use of these technologies, or further manage your preferences. To opt-out of sharing with third parties information related to these technologies, select "Manage Settings" or submit a Do Not Sell My Personal Information request.